By allinclusivespor May 22, 2014 Fishing Reports 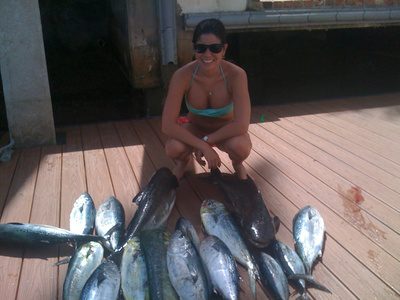 Pictured is Corrine who joined her boyfriend Chris, his dad Keith, Tripp and his friend James for a Ft. Lauderdale deep sea fishing trip aboard the Marlin My Darlin. As you can see there are a couple of Cobia joined by five Mahi-Mahi and some tunas and Bonito. Lets talk Cobia.
It?s always a treat to come across some Cobias and there will continue to be some Cobia passing through the area like those two in the photo with Corrine. These fish came off of a Leatherback turtle that was making his way south just outside the reef and there were Cobias happily tagging along with him as they are moving south this time of year as well. Leatherbacks are a very large species of turtle and not at all common here. Often very spooky and when they submerge the Cobias typically follow him down and out of sight. Any turtle can hold Cobia, but the big Leatherbacks hold the most by far. These fish will also hold on structure such as a shipwreck and we catch them incidentally when trying for Amberjacks and Grouper. Always a nice surprise there. We are seeing them at the surface alone and again swimming south as well. They love Rays. Wherever you happen to come across them a frisky live bait, not too large, is the preferred bait here in South Florida. We love these fish and wish there were more. Shortly they will be essentially gone until fall from our fishing area.
We continue to see the Mahi-Mahi but they have been erratic and often smaller fish when we do come across them. Tuna off the edge and it seems they bigger ones are as usually most active late in the day. Nice Wahoo a couple of days back and often fair numbers of good sized Kings continue to be at the edge of the reef. Tight lines.

Nice bite today on the Marlin My Darlin 46 #sailfi

Catch a small one, send it back out, kaboom. Fatti

Alice and Mark aboard the Marlin My Darlin 53. #r

Kevin and his family joined us here aboard Marlin

Big as me,... Bigger than me, with some help from

Al smilin with his Cuda this morning on the 53 wit

Jacks on the wrecks this morning. Marlin My Darlin

Mahi-Mahi and a box full of Bonito afternoon fishi

This afternoon aboard the Marlin My Darlin 46. Fis