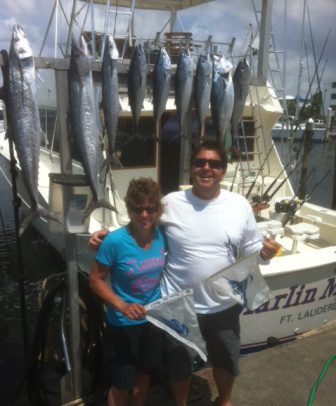 The fishing forecast for the waters off shore of Fort Lauderdale in June is as follows First and foremost? Be prepared to reel, a lot! As the waters warm we move away from live bait fishing and concentrate more on trolling. Trolling allows us to cover more ground in search of fish and when we encounter a school of Bonito? You can expect more than just one at a time with these strong fighters. Tons of fun to catch but not very good to eat, these fish are thick in June and eat almost anything we put out. And with the kids out of school? Its a great time to bring them They wont be bored waiting for the next bite.

In the same area we catch Bonitos, we also catch Kingfish. Most the big ones are gone but a few still remain. The smaller Kings arent bad to eat and were happy to catch our limit when they are biting well. Wahoo and Sailfish will also be around the reef area if they can grab a bait before a Bonito does. ?

Thats Ron and Rita from California in the picture. One Sail and all other fish were caught on the troll, the other Sail was caught on live bait. Both Sailfish were released alive back to the sea.

Once weve caught a few fish for everyone, its worthwhile to take a look out in deeper water for floating debris, weedlines, anything that causes shade, protection and holds some baitfish around. This is often where we find Mahi-mahi and Wahoo, two excellent eating fish. Summer Mahis are usually small fish but again, a blast to catch and exciting to chase around, that is, if youre lucky enough to have the birds on them. Wahoo also frequent the same conditions and are hooked on our deeper lines. A Sailfish in deeper water is not out of the question either.

We also spend a bit of time fishing the bottom for Grouper and Snapper. These fish DO like a live bait and a dozen live Pilchards arent a bad investment for some of the shallow spots we visit. Live or dead bait can work well on the deeper wrecks and reefs but again, youll be doing some winding on those.

June is also an excellent time for those deep drop Swordfish baits. The Gulfstream current is a bit slower in summer than winter and the bite can be very good! And on our way to the Swordfish grounds? Mahi, Wahoo and maybe a Marlin are always possible en route.

Thats our forecast for fishing the Fort Lauderdale area in June. Our daily reports will fill you in on what we do day to day. Hope to see you soon.