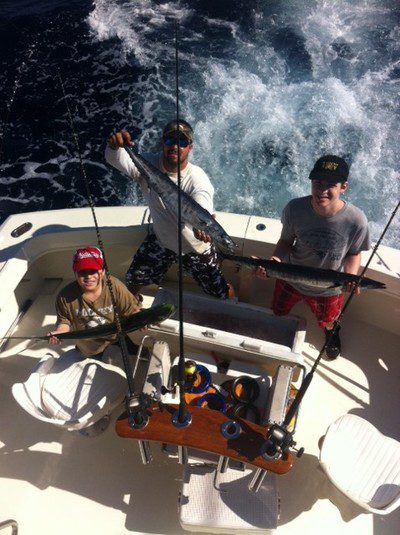 When John called ahead to reserve the Marlin My Darlin he said Ft. Lauderdale Deep Sea fishing was what he wanted for his kids Ruben and Aaron. Possibility his wife would join them for the charter but he wasn’t certain. They were in for sure. Mentioned to John to allow about 45 minutes for the drive as they were staying up in Palm Beach County and that was fine by him and John and the two kids made the drive a few days later and Capt. Chris and Brian lit the engines and headed out for this AM charter.

Pictured are Ruben, Aaron and 1st Mate Brian with a couple of Wahoo and a nice Mahi-Mahi. Two more Wahoo were caught after this photo was taken. Nice to catch a few nice Pelagics (especially for the kids) as the fishing continues to be erratic for fish such as these. We continue to spend time hitting the bottom spots, and that fishing has been O.K. and it’s nice to hook a few on or near the surface. There have been some tough days here, we need some true Winter weather.

Continued calm winds especially early in the morning. I guess it is official we are experiencing record high temperatures here in South Florida. Up almost 3 degrees on a daily average here but up 7 degrees in the Palm Beaches and a full 5 in Miami. No rain as of late. There is a front on the way and hopefully this one has the horses to push into here with some Winter type days. It’s not as if we’ll ice up, probably just switch to the short pants around noon.

Tight lines and good fishing to all