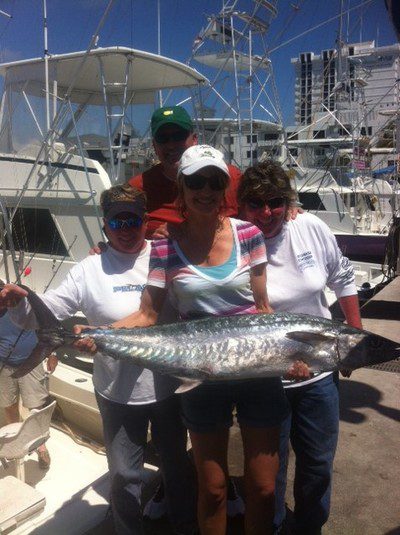 Here off of Fort Lauderdale fishing charters are offering better action and also some larger fish as well. We have picked away at the Kings and some are really nice ones as you can see by the fatty that Denise has across her arms. She and her family fished with us on tax day on a half day trip. Certainly a larger King than most. We continue to spend a lot of time on and just off the reefs. Wahoo, a couple of Sails on or near the surface and Golden Tiles on the bottom out in 600 to 700 feet of water. And the larger Bonito have moved in the last two days blasting almost anything when they get into our trolling spread. Good fun but they do slow down the chances for Kings and Hoos as they tear the line off the reels and we stop to fight them. But it isn’t always that result, as we did hook a nice Sail on a sinking long rigger surface Bonito strip as we were practically dead in the water with the Bonitos hooked up.

The last two years we were into the Mahi pretty good at this time but they are a bit slow to show so far. We catch a few but the nice schools of fish are scattered and just not dependable as yet. Nice to catch some and we thought it was on, but not just yet I’m afraid. Very soon, and generally not too far offshore this early in the season when they are here. We’re keeping our ears open and are ready to go, but for now we will on most trips stick by the edge, and bend the rods, as it has been productive on most days. There are some good fish there, especially the Wahoo.

Beautiful weather and a couple of very light brief showers the last two days. Nice breeze out of the south and clean clear water continues at or near the edge of the reef @ 100 feet a mile off the beach.