By allinclusivesporSeptember 22, 2015Fishing Reports
No Comments 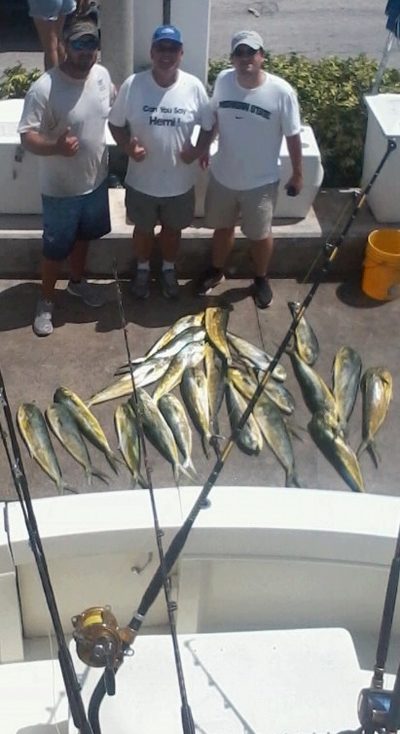 We spend a lot of time on the reefs here on our Ft. Lauderdale fishing charters as bending the rods on charters is of course a priority and often the reefs do just that. But today we had a 6 hour trip and with a clear morning we chose to take a shot offshore. Our fishermen Matt and Larry had fished with us the morning before and had caught a good number of fish on the reefs so I asked them if they would like to try a different tactic and go straight offshore. After digesting the information that not every trip off the edge has a happy ending fish wise they said they were up for it so off we went. Matt has been with us before but these were Larry’s first trips with us.

Beautiful flat calm conditions with a touch of early morning fall. Small touch, only a few degrees that left us and back to hot by mid morning, but a nice change while it lasted. By 10 AM that sun had the Mercury heading back up there. Actually the first day of fall today. Bring it on, and we look forward to the bait schools will be coming down the line more often as well.

All that seaweed that has been passing by here this summer had at least for today moved on to the north and as we pushed offshore the ocean was devoid of any weeds and flying fish as well. Very little current this morning out front but we luckily found some to the south. It took a bit of searching but at 850 feet we located an edge that was running off to the northeast and holding eel grass but no real seaweed. We were fortunate to locate this edge as others who didn’t find it struggled with the lack of seaweed, light current out front and very few floaters to hold bait. As we worked deeper on this thin slight winding and erratic edge and out to a maximum of 900 feet, although there never was any seaweed, it grew stronger and held some bait on the northwest side, and we found our Mahi-Mahi there. Fun trip as we came across four small bunches of fish and they were decent fish with no undersized throwbacks. Followed up well for the spinning rod baits at the stern and took small live baits and chunks as well.