up some pretty good action. The majority of the fish we have caught these last several days continue to be within two miles of shore.

Blackfin Tuna once again are taking center stage with some very good catches for us and some larger ones as well. Trolling has been the key and although these schools of fish are not showing on the surface we have had multiple hookups at one time in depths ranging from 120 to 350 feet of water. Good fun for all, especially kids, as we all know younger ones thrive on action and these Tuna have been responsible for more than a few children these past few weeks having a positive experience offshore.

Some schoolie to slightly larger Kingfish are showing up on the reefs and some larger Bonito are also taking baits in water inside of 150 feet of depth. The choice of the word “some” is accurate as although there are more available than on earlier charters we would like to see a few more bites. The same holds true with the Mahi-Mahi with the main difference being we have found most them outside of that 150 depth and on out to 600 feet. Occasional Wahoo again a possibility. 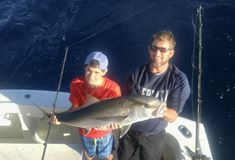 That ripping north current has switched to a slight south flow now and we are picking away at the Tilefish once again but this south current is not our favorite as we have mentioned before. The lesser current has allowed us to successfully catch some large Greater Amberjacks on the wrecks.
For those choosing to target Sailfish the wait for a bite continues to be lengthy, but always a possibility. Actually very similar for sharks as well.

Just spoke with Captain Matt who is on the bridge of the Marlin My Darlin today with 1st mate Garrett running the cockpit and he reports good Blackfin Tuna action continuing this morning in those same depths we mentioned holding true. This is an absolutely post card perfect Chamber of Commerce day here in Fort Lauderdale with a very slight early morning fog now burned off ( 10 AM now) with a cloudless practically still morning presently @ 71 degrees. Looking to hit 85 later today. Here’s to some more of this.

Tight lines and god fishing.
Rick, Matt, Tommy, Garrett and JJ aboard the Marlin My Darlin

Eric a returning angler aboard the Marlin My Darli

Sailfish ate a fast fished Islander/Ballyhoo and A

Paul and his sons this afternoon. This nice Wahoo,

Nice Sail for Andrew’s group on their Ft Lauderd

Starting off the day nicely today after yesterdays

Mahi& Wahoo this morning. Slipped off the edge and

Kirby and Coleson aboard the Marlin My Darlin this

Matt and his Lady wreck fishing this morning aboar

Renee joined us this morning for I believe is her

Some good sized Amberjacks on the deeper wrecks.

Tunas with Bonito in the mix. Matthew and pals abo