This Fort Lauderdale fishing report will talk about continued reasonable action on the offshore fishing areas in Ft. Lauderdale. Really favorable fishing conditions here now with mostly sunny skies and the possibility of rain is very small day after bright skied day. A brisk east/southeast wind has been blowing today and those calmer sea conditions have changed but this new breeze is fishable and giving our area a pleasant cooler feel.

Blackfin Tuna are taking up a lot of space in the fishbox and there are some good sized ones to be caught. Bonito (Little Tunny) getting in on that action as well and that is not at all unusual. Inside of 300 feet of water has been a good area to search for these fish. Some Sailfish here and the numbers are up with expectations of more fish tomorrow with this new breeze. These fish tend to be on the wild side when the wind is up and some of them can really be a handful.

More and more larger Sharks as we head for the peak times for these fish. Big girl Hammerheads and continued large Threshers. Here and there a Bull Shark with the larger Bull Sharks moving to the wrecks as the Amberjacks begin to get thicker on those wrecks as we move into April. As they (both the Bull Sharks and the Amberjacks) share a wreck many a nice hooked Jack won’t make it to the boat as a good Bull takes half a 50#er in a single bite no problem, and fairly often will take the whole fish. Bull sharks are a very smart fish and an open water bite from a traveling shark is much easier to coax that a bite from one who is Sheriff on a good wreck. That is why often the bite only involves that back half of the Amberjack. Smells a rat so to speak. Smart Shark.

And those Amberjacks are moving in and we like a frisky live bait for them with our favorites being that much mentioned live Bullet Bonito or a king sized Blue Runner,which is a member of the Jack family. We catch some on various butterfly type jigs as well, but most of the bigger ones come on the live baits.

Some Kingfish showing along the reefs but they remain very scattered. A Wahoo here and there despite the moon phase.

Tight lines and continued good fishing from Rick, Matt, Tommy K and JJ aboard the Marlin My Darlin. 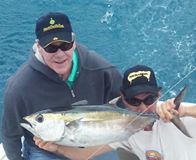