We are happy to report good action on the near shore reefs continues again to be the norm on our Fort Lauderdale fishing charters. The last few days have proved spotty for the Mah-Mahi out in the deep with not a lot of fish moving through and the ones offshore now seem content to gather around floating debris as opposed to the passing schools actively on the move we had been seeing. Find the right piece of debris holding fish and you are in luck, but certainly fewer Mahi as opposed to what we had been encountering. Always a chance for them, and a Swordfish charter is a good reason to get out there in the deep and hopefully find some along the way.

So with the Mahi-Mahi numbers lower we have been hugging the reefs and having good action there as we spoke, but we keep close attention to the Mahi-Mahi and their presence in our area. Good summer time Kingfish action in water from 100 to 150 feet of depth. We have continued to troll these reef lines with deep lines aimed at getting the bites from these fish. We are fishing only Bonito strip baits in an effort to hold down the numbers of Bonito biting on those deep rods but the Bonito often happily pile on the strip baits in big numbers. Not a bad circumstance when you are looking to keep the rods bent, especially with the kids getting on the rods, but they do limit the Kingfish numbers as we have mentioned before by taking those baits out of the overall picture while we reel the Bonito up. Some days really big numbers with those Bonito (25 the other day along with 7 Kings) when they are thick. It can be fun for sure when they are so numerous as that day was a corporate tournament involving 4 boats with prize categories of most and largest fish. The horde of Bonito pushed up to #1 in numbers and one of those 7 Kings took biggest fish @ 18#s. Not a giant King but a very nice one, and the nicest one that day.

Again always a chance for a Wahoo now with really big fat ones on the radar. Think big here along and near those reef lines, we have been, and while not having scored a pig yet we will.

Snappers, Jacks of all types and Tilefish around now too. Hammer away at the Mahi if they are at the top of your list, they can’t hide every day. Tight lines and good fishing 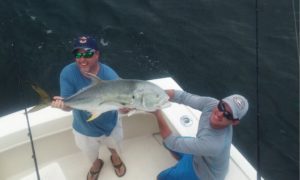 Girls Rule this afternoon aboard Marlin My Darlin.

Great start of the day. Laci with her Sail and the

Kevin's charter this morning, with his pal Capt Ke

Bob (79) fishing with his son John this morning.

Nice Blackfin to start off the morning for John an

Shelly and Dan joined us today. Warsaw, big AJ and

Jackson and Quinn and their tasty Blackfin Tunas.

Paisley with her family this morning on the 46' Ma

Mark and his family this morning and elated Piper

Very hot and bothered Hammerhead powered up from

Michelle and Jeremy aboard with us this afternoon

Bill and his family this morning. Bring those kids

Matt and his buds this morning #marlinmydarlinspor

Josh and his group today on the 46' Marlin My Darl

Doug and the boys this morning on the 53. Kings do