Early May and good action this week.

By allinclusivesporMay 5, 2018Fishing Reports
No Comments

Deep sea fishing charters in Fort Lauderdale continue to offer opportunities at good catches of Mahi-Mahi and Kings. It has been breezy which has got the ocean chopped up and that breeze has continued to have the Mahi-Mahi close to shore and they have been aggressive.

Trolling again in water just off the edge in depths from 200 to 500 feet has proven to be productive with some of these fish being of really nice size and as we mentioned they have been aggressive in taking the baits. On an afternoon charter we did find them deeper on a current edge in almost 700 feet of water, but as we mentioned most fish have been much closer to the reefs. They come into the bait spread at speed and don’t hesitate to grab the nearest bait. We feel a lot of their behavior is due to the fact that although there continues to be a tremendous amount in the weeds offshore here there are few of the baitfish the Mahi-Mahi hunt. Smaller members of the Jack family, minnows, Filefish, Triggerfish, puffers and even Seahorses are fair game for hungry Mahi-Mahi and we see hardly any of those species of baitfish in the weed for now as we search out the Mahi-Mahi. Very few Flying Fish as well despite good clean clear blue water. So the Mahi come in fast and reckless and that makes our job easier, other than constantly clearing the weeds off the baits. At times we have got followers to take chunk baits or a small live bait but many fish continue to come in as singles or pairs. And that weed is thick, washing heavily onto the beaches and now stacked up in inshore canals leading off the Intracoastal waterway.

Kingfish are as expected scattered along both sides of the outside reef and often right on top of it. Trolling deep fished lines or floating live baits will bend the rods, but so will all the weeds that have massed there. No place on the reefs has offered a break from all those weeds and it has been brutal on the mates as they fight to keep the lines clear. Big fat Bonito in there too and also some good Blackfins, typically just a shade deeper. Just deeper has also held some Sailfish, but few in number.

Overall the fishing in quite good and it has been nice dropping the word “erratic” from our reports. The weather is forecast to be pleasant and clear, and that persistent onshore breeze has lightened up making for some smoother sailing for those who are ready for a bit less chop, myself included.

We’ll see you offshore, the Mahi-Mahi are waiting. Rick, Matt, TKS and the weed pullin JJ aboard the Marlin My Darlin 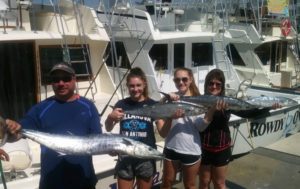 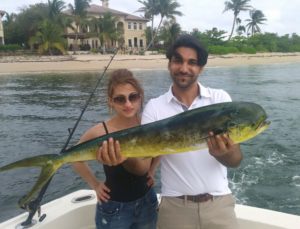