By allinclusivesporJuly 14, 2018Fishing Reports
No Comments

It has been a busy week here aboard the Marlin My Darlin. Mixed bag of catches of different varieties of fish. The only real bump in the road was that we tried the Swordfish and they had other plans. Very good conditions with flat seas and a good moon phase, but we didn’t score there. The only less than hoped for factor was a considerable amount of current but we were still able to present the baits favorably. The fish do have the last word. We’ll certainly try them again in the near future.

Mahi-Mahi, Blackfin Tuna, Kings, and some Bonito and also some larger Barracudas. Some nice Jacks on the shallow as well as the deeper wrecks. Occasional nice snapper on those wrecks too.

Warm but not really too hot and the expected passing showers have been few in number that typically come along with our Southeast Florida summer days. Pleasant sea conditions continue offshore. The incredible amount of seaweed continues both on the reefs and offshore as well and the mates are being kept busy once ( really much more than once) again pulling the lines to clear off the weeds.

As promised in our previous report we have included some pictures of the little lady anglers who have joined us here on our charters. Boat is fishing now with a “ Bachelor” party, tomorrow morning it is kids again, Grandmom’s treat.We’ll put up some photos of the big folks next report. Tight lines and good fishing. See you on the rip 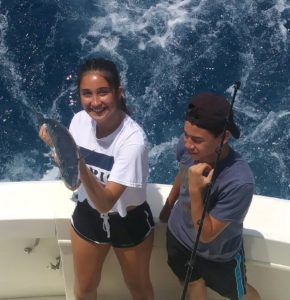 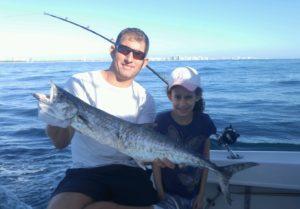