Our first cool front of the season has arrived and just in time. Records have fallen by the dozens for high temperatures this time of year but tonight it will be, if accurately forecast, a decidedly cooler 53 degrees, and this should have a positive effect on our Ft. Lauderdale fishing charters once the front passes. Major rain event here began at 2 PM yesterday and lasted well into the night as tropical system Phillipe passed quickly across the southern tip of Florida. This “cool front” swept Phillipe rapidly out of here and today has been beautiful. No clouds, westerly winds as the front takes control, and the calm seas near shore that we all appreciate. Wickedly rough way offshore, but who cares. Very nice in the areas we fish.

The water continues to be off color on the reefs, but there are a lot of Kingfish out front of our inlet. Plenty of these Kings happy to bite on most days and right out front of our inlet. 18 the other day with most as expected on the deeper lines, but the surface lines got attention as well. While these fish on many days as we said are here and biting many are smaller fish which we are carefully releasing. But there are some good ones in the mix as you can see by the photos of recent anglers here aboard the Marlin My Darlin.

Despite the less than ideal water clarity there have been some nice Mahi-Mahi inside and an occasional Sailfish as well. We expect this to improve with this passing front. The large amount of rain yesterday might complicate this if the state decides to release some fresh water that accumulated in our inshore canals from that major rain event yesterday, but the fish will want to move regardless if there is or isn’t a discharge of all that fresh water and it will be as usual a matter of locating them. The Kings won’ 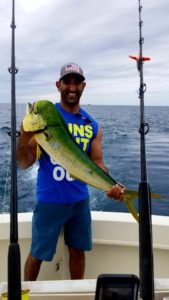 t move too much but the Mahi and Sailfish could be in much deeper water.

Full grown Sailfish for Trevor and crew on an AM F

Nice way to start the morning (any morning!!). Cla

Colton gettin it done this morning on the 46 with

Speed Merchant hits the ice. Nice Hoo on the 46 M

Also a second nice birthday fish for the birthday

The fish so nice they named it twice. Good one for