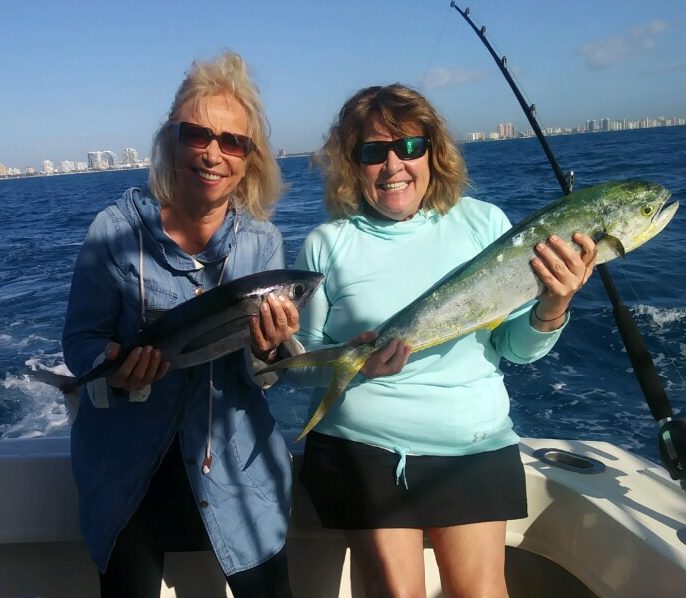 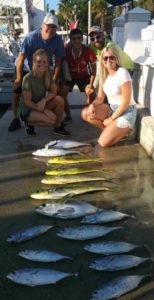 These last several days have resulted in many species of fish being available on our Fort Lauderdale fishing charters. Beautiful deep blue water accompanied by a good north current has brought us Mahi-Mahi, Tuna and Wahoo. Loads of Flying Fish have once again got the Mahi going and we have caught them in water ranging from 100 to 650 feet with the area between 400 to 500 producing the most bites.

The Blackfin Tuna continue to be basically invisible until the strike. Oddly they are continuing to show very little interest in those Flying Fish. Almost all of these fish are inside of 300 feet of water on most days, but we found them today in 600 feet, but only 3 of them, as we searched for the Mah-Mahi. Caught the Wahoo pictured with this report in 600 feet also, missing one in 320. Deep line bites on the Wahoos.

Sailfish remain few and far between with only a single strike from one today. Sharks remain consistently present in water from 150 to 400 feet. We continued to lay off the Tilefish due to the heavy current out in those depths.

This latest front has been disappointing in that although we have had some decent catches the erratic fishing of last month is certainly not a distant memory and a good day offshore can easily be followed by a poor one. This frontal system isn’t quite done with us yet with some north wind in the forecast for 3 more days. So the next few days of the north wind coupled with this north current could still have some positive results offshore. We’ll be there. Tight lines.