By allinclusivesporFebruary 25, 2018Fishing Reports
No Comments 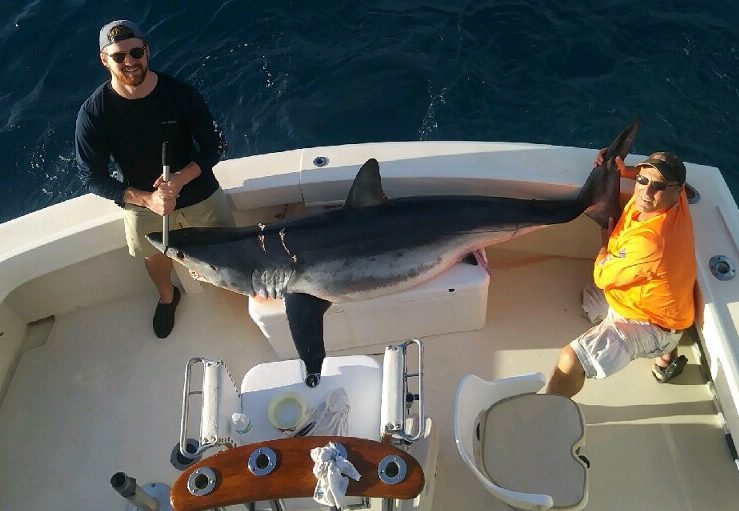 Fort Lauderdale fishing charters. Late February is typically a shade early for any numbers of larger sharks to be migrating through but there can be no doubt that the last two days have offered shots at big sharks. Center stage is the Hammerhead and we had a huge one come to the transom yesterday to inspect a rigged Tuna and then fade to only reappear again, think it over, and once again fade away. A streetwise older one. Never bit, but certainly filled the lens and got everybody going. Smaller ones, 6 to 7 footers and still good sharks, are mostly near or at the surface swimming slowly to the south until they catch the scent of the bait and they then most get amped up quickly. The bottom is always a good place to draw a Hammerhead bite, but the surface has been better. And the blue water and current has had some Thresher sharks passing through. Almost always a bottom bite when a Thresher takes a bait.

Shark fishing is fun and we have a good number of customers who request it. Fishing for Sharks is not complicated and actually quite simple. Fresh bait, good current, and cover the water column from top to bottom here off of south Florida and the odds are good you are going to test your muscles this time of year.

“Mako March” we call it here. Well a few days left in February is a bit early. But it is nice to see “early” as many species have shown up later than expected over the last few months. So you probably saw the lead picture right away and here’s the script. Afternoon charter. Working a floating board hoping for a Mahi-mahi or three. Captain Matt sees a truly huge explosion and then commotion 150 yards away. Leaves the board quickly and heads to the spot as the commotion continues. The fellow with the big teeth was already into bite two or three on a Swordfish that was separated from it’s tail with the initial bite, which was the surface explosion. Larger Shortfin Makos know the ropes and a tail less Swordfish is diner for sure, results in a much more leisurely and far less energetic meal, and that is why very often the shark begins it’s attack on a Swordfish by removing motor. Matt got the boat close enough to get a gaff ( a long gaff ) in the hapless and now much smaller Swordfish, cut a chunk, baited up, and there’s the photos. The shark had to have that chunk of Swordie when they quickly slid it back to him. Match the hatch isn’t just true for Trout in a beautiful mountain stream. It rings true for many types of fishing, especially when an actively feeding fish has had a taste of a certain item. That shark couldn’t resist taking that next bite of Swordfish despite the boat being right in his face.

Blackfin Tuna are beginning to bite well and 200 to 350 feet is best. Tons of small flying fish in those and deeper depths but the Tunas are not really showing up on them. When the Flyers do get up they number in the hundreds, getting up on the wind in unison and beautiful to see with the present clear skies and blue water, but it is only small undersized Mahi pushing them. Sailfishing remains off and we spent a lot of time dragging a spread of live Ballyhoo yesterday without a single Sail or Mahi trying us in water from 100 to 600 feet before we switched off to troll the Tunas. 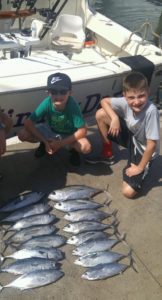 Tight lines and good fishing from all of us here ( Rick, Matt, Tommy K and JJ ) aboard the Marlin My Darlin. See you on the rip.

Eric a returning angler aboard the Marlin My Darli

Sailfish ate a fast fished Islander/Ballyhoo and A

Paul and his sons this afternoon. This nice Wahoo,

Nice Sail for Andrew’s group on their Ft Lauderd

Starting off the day nicely today after yesterdays

Mahi& Wahoo this morning. Slipped off the edge and

Kirby and Coleson aboard the Marlin My Darlin this

Matt and his Lady wreck fishing this morning aboar

Renee joined us this morning for I believe is her

Some good sized Amberjacks on the deeper wrecks.

Tunas with Bonito in the mix. Matthew and pals abo